This week I will shamefully admit to you all how terrible I am. So, remember that low-buy I said I was on? Yeah, the one where I could only buy a plant if it was on my wish-list which consisted of only five plants? Welp. I’m about to confess my sins publicly, on the internet. Buckle in, plant parents, we’re doing a January Haul.

The month started off strong. My husband and I were out on an Ikea trip (the closest one to us is a 40-minute drive, so you kind of have to make it a day-long event). I browsed the plant section of Ikea, which I often lust after online, but when they put that section at the end of the maze and my cart was already filled with $300 worth of furniture I didn’t really need, it was much easier to gloss over the hanging planets and cute pot covers. There wasn’t much interesting at this location by way of actual plants, either. There was the odd unique peperomia, but nothing I didn’t already own. So, we left Ikea without any plants. However, there is a greenhouse down that way that I always want to stop in at, whether I’m in the market for anything or not, just because I don’t often get down that way, so it makes sense to stop in while I’m already down there.

I was actually surprised at how unimpressed I was. It’s a larger commercial greenhouse, and I understand that the real money is in bedding flowers in the spring, but they do have a large section for tropicals. The houseplants they do have though, are your really common stuff.

So, feeling a bit defeated, I was determined to purchase something while I was out. I chose a mini purple phalaenopsis orchid. Purple wouldn’t have even been my first choice of colour, but I was limited in what I could go with, as I had in mind that I wanted to plant it in a small glass terrarium and couldn’t exceed a certain size. Orchid had made my wish-list because of the terrarium (I was gifted it for Christmas) and because I was interested in taking on a new challenge in my houseplant parenting.

It’s done fairly well in it’s glass container. I put a layer of river rock in the bottom, and then just used sphagnum moss as growing medium. It had two flower stalks to start with, and actually started to grow a third, but by the time I noticed, it had grown too close to the moist side of the glass terrarium and the tip rotted. My flowers have almost all fallen off (I have one or two hanging on) and the smaller of the two main stalks is starting to die back. I will prune it soon. The leaves look good—nice and green and plush, and I can see the roots really well in the sphagnum, and they too look healthy. So far, my first orchid has been quite successful!

My second acquired plant for 2019 was another wishlist plant! One cold evening in January, I was surfing the Instagram, and lusting after the plants of illustrious plantstagrammers. One such plant was the string of hearts. When I was last in the UK, I went to a small plant shop in Town and saw them there for sale. Of course, you can’t just get on a plane back to Canada with a potted plant, so I had to leave them there. Since I’ve been home I have had my eyes peeled for the little guys. I have had no luck whatsoever. So, forlornly, I drew a little illustration of them on the chalkboard wall in my room, and posted it to Instagram, lamenting my lack of string of hearts.

Enter Elle Half, plant parent extraordinaire. She runs the Bunz Planting Zone Guelph (& Area) Facebook group and adjoining Instagram. (If you live in the area, check it out here). She reached out to me, said she had some SOH cuttings, and offered them to me! In the end, since I couldn’t just accept these wonderful cuttings for nothing, my first plant trade ever was two SOH strands (with teeny roots starting!) for a coffee from Tim Hortons. It has been the highlight of my plant parenthood thus far and has opened my eyes to trades and getting involved in my local houseplant community!

My SOH cuttings are rooting in water, awaiting the day I feel brave enough to transition it to soil. I’m so scared of losing it, so I will probably let it continue to root until spring, and then I will pot it up. I’m sure I’ll keep you all posted on the process and results.

Third was a whoops. I had printed out a wishlist of all the plants I really wanted, and then starred the five I was allowed to purchase during the low-buy. Cthenanthe Burle-Marxii was on the big list, and I thought it had made the short list, but apparently I had bumped it for a Maranta Lemon Lime. Oops, oops, oops. I didn’t notice this until after I had bought it. But trust me, that was the least detrimental thing that happened that day. I had stopped in a Belgian Nursery on my way home from work as I so often do. In the front of the store they had multiple carts full of houseplants waiting to be placed out for sale. I caught a glimpse of them as I wandered by.

I found my Burle-Marxii and left, swiftly, but on my way out a certain bright orange leaf caught my eye…

I went back the next day, hoping they would have the new stock out. They did. They had also placed a bunch of their older stock on clearance racks to make room for the incoming flux of new tropicals. I picked out a variegated green maranta and a peperomia (unknown) from the clearance racks for $2 a piece! Then I looked at the new stock.

The orange leaf from the day before stuck out like a beacon amongst the green. I approached with caution. There, as I had guessed, was a shining orange leaf of a Prince of Orange philodendron, still juvenile in a four inch pot.

This couldn’t have been any better. Not only was it a plant I had very desperately wanted (but neglected to put on the list because I figured I had a better chance of finding different plants) but it was a manageable size! My biggest problem right now is surface area, and adding a 10” pot to the collection right now just isn’t practical. I quickly swept my dearest prince of orange up. But then. Then something happened I hadn’t planned for.

It was a variegated watermelon peperomia. Without spending too much time mulling it over, I grabbed it and made a very fast dash to the register.

I spent most of the evening apologizing for being so weak. 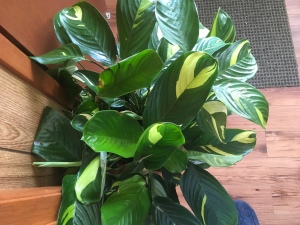 The eighth one was the fault of many a local Facebook group, pointing me in the direction of Walmart, many of which had received shipments of large tropical plants. Now, this one I somewhat regret, actually. Its too big. I just don’t have the room for it, so for now it’s tucked in the corner in my hallway. I took three cuttings and stuck them immediately into soil, so here’s hoping they take off. If all goes well I will keep the new smaller plant and let the larger guy go.

I don’t even have an excuse for this one. I already have a philo Brazil. It’s doing well. But, I moved the smaller plant I already had into my bedroom downstairs, and I love Brazil’s so much that I missed looking at it upstairs. I also had moved some plants around and I had a wicker plant stand with nothing in it. I thought a Brazil with it’s gorgeous leaves and training vines would look stunning, so I went over to Belgian specifically to get a Brazil. 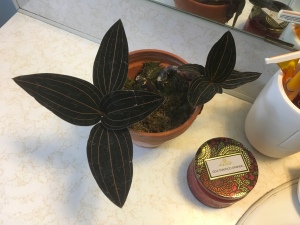 On that same trip to Belgian, I brought home this gem. Now, this was not actually in impulse buy. The price tag was rather hefty, and I had seen these there a few times before I actually bought one. I wanted to be sure I had what it took to keep this thing alive. It’s just so damn gorgeous. I have it in my bathroom right now, and the leaves look so striking against the off-white colour of my bathroom vanity. I will do a post in the spring about my adventures with this guy, for sure. I know that this plant puts me into the double digits for January, but I do not regret it for a moment. Its honestly one of my favorite plants right now.

So, there you go: for a month that I was supposed to be putting a halt to buying plants, I bought ten of them. That really isn’t too bad if you think about it, considering I was going to allow myself 5 plants. What the low buy did accomplish was making me think about the plants I was purchasing for the most part. If I didn’t consider the purchases before or during, I at least felt guilt about it afterward, which is something, I suppose.

Tell me about some of the plants you’ve acquired so far in 2019 in the comments! I’d love to know that I’m not alone. See you next week, Plant Parents!